Repo! The Next Chapter... (And this marks six years of Paper Wing Shows)


On October 9th, 2010: My love for "The Genetic Opera" is certainly no secret. It was one of the most anticipated movies of the year for me when it came out, I drove well over two hours and into the heart of Berkeley in order to catch it on opening weekend, and it's become a staple diet of cinema to share with friends. My wife and I both consider it one of our favorite adventures and even she, who is not a fan of gore, enjoys the music and spectacle of the opera. So I kind of jumped a little for joy when the local Paper Wing Theater decided to run a live performance... These were the words that started me on a journey into the world of stage performances. And while I have repeatedly reviewed Paper Wing reprisals for The Rocky Horror Show, this play has always remained one of the three performances that have hit me the hardest. And, in the spirit of full disclosure- there was a part of me that didn't want to see the show again. You see, I had these memories and they were amazing and wonderful and I know how hard it is to capture lightning in a bottle twice. So much has shifted and changed in the theater and in the community and within the Paper Wing Family itself... but while that small part of me had a bit of nervous-nelly fear, there was a larger part of me that was eager to hear LJ Brewer once again become the monster. The Repo Man.

Brewer has an amazing voice, as always. And he has to carry much of the emotional weight of the show on his shoulders- a man torn by duality between the loving father and the maniacal surgeon. He is soft and gentle in one paternal breath, but there is a gleeful madness in the next. Brewer plays the role with sadistic energy and delivers a thrilling rendition of "Thankless Job" to the glee of the bloodthirsty audience in attendance. The emotional beats of the plays duet finale with Shiloh are heart-wrenching and Tiffany Jones tackles her own character with a rebellious anger that made her a force to be reckoned with. This angry Shiloh brings the audience into her world and brings righteous fury to the revelations that surround her life.

One of these revelations being the connection between her mother and Geneco spokeswoman, Blind Mag. Mag (Mindy Whitfield) prepares to leave the employ of Geneco, and sees an opportunity to make up for her past mistakes and help the daughter of a dear friend. Whitfield is haunting and mesmerizing during her rendition of Chromaggia, the most traditionally operatic of the songs in the show. 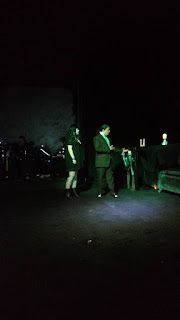 Shiloh and Nathan are trapped within the machinations of Geneco and the Largo Family, led by patriarch Rotti Largo. Nicholas Kelly CONQUERS this role! I want to write like paragraph after paragraph about how powerful this man is as a performer, but the truth is that it would all be redundant. Kelly just fucking CONQUERS the stage. As for the rest of the Largo family: Cody Moore delivers a gleefully decadent performance as Pavi (Everyone loves him), Taylor Landess is all in as a brutal Luigi, while Sara Mar Don primps and preens as the pampered surgery princess daughter, Amber Sweet.

The story unfolds with the help of Graverobber, an audience narrator and occasional guide for Shiloh. Played with mischievous energy by Jordan Brewer, Graverobber introduces the audience to various components of the world in which Geneco exists even while collecting and dealing illegal Zydrate to a culture of addicts that have sprung up in the wake of Organ Transplants. He's a monster of a different stripe and it's hard to tell if he truly wants to help Shiloh or simply lead her down a primrose path to self destruction.

Reserve your seats now because Repo! The Genetic Opera plays for only one more weekend with two additional shows on Halloween night. I'll be going again, that's for sure. 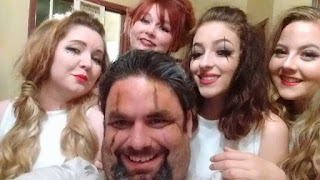