Several years ago, around 2004, I discovered Samurai Chambara (sword fighting) Films with nearly everyone's usual introduction- Akira Kurosawa. He'd been named a heavy influence on some of my favorite film-makers and my (future) wife introduced me to The Seven Samurai. I'd never seen such an epic and masterful tale of honor, loyalty, respect, duty, and dignity. And while I had seen the American Western remake, The Magnificent Seven, it truly did pale in comparison to the original. And so began a fascination with Chambara films-

Zatoichi is a blind swordsman and part of the Yakuza tradition during the Edo period of Japan. He makes his living as a masseur and/or as a gambler. He carries a cane sword and his flashing blade is often quicker than the eye can follow. He is a skilled warrior- and an often cheerful and unassuming champion to the downtrodden. Thematically, Zatoichi is about a flawed and sentimental hero trying to bring justice in a world threatened by corruption and tyranny.

Oh, and there are 26 films in the series.

And a television series.

And two additional films made several years after the original actor's passing...

And a live stage show directed by Takashi Miike.

I spent the month of July viewing 25 of the films, currently streaming on the Criterion Collection streaming service. That's 25 of the original films... 1989's "Zatoichi, Darknless is his only Ally" was unavailable. This last film also had a lot of very negative associations- the films villain, played by Shintaro Katsu's son, had accidentally killed a man during filming when a prop sword was mistakenly replaced with the real thing.

The Twenty Five original films are too staggering a task to review one after the other and that was not my intent when I undertook the task. They all follow similar formulas and features the same actor playing the role all 25 times, with several plots borrowing liberally from one another. Zatoichi delivers children to absent parents some distance away after the untimely death of one parent a number of times, helps maidens' pay off their family debts to the corrupt yakuza or government official, and usually befriends another skilled swordsman that he will face in a climactic battle toward the film's climax. The formula itself isn't bad, despite it's occasional repetition. In fact, it's often charming and comforting to know that Zatoichi is getting into the same bowl of trouble again and again.

Shintaro Katsu is a skilled performer who has a bit of a reputation as a bit of a "bad boy' in Japanese Cinema. The son of a Kabuki performer, Katsu was classically trained as a Shamisen player, and it was the influence of his blind teacher that acted as the inspiration for his performance as the folk hero of the series. He was the focus of a documentary on Japanese film making, where an American in Japan followed three Directors with vastly different styles in order to show-case the direction of that regions film industry. Katsu Productions was started when Daiei Studios shut down.

Zatoichi starts with "The Tale of Zatoichi" and never really finds an ending- though the twenty-fifth film in the series would see Zatoichi return to the town of his birth and have him defend it from a child-hood friend in "Zatoichi's Conspiracy". Notable films for me have been "Zatoichi's Flashing Sword", "Fight, Zatoichi, Fight", "Zatoichi and the Chess Expert", "Zatoichi's Cane Sword", and "Zatoichi Meets Yojimbo".

"Zatoichi Challenged" also served as a basis for the American remake, "Blind Fury" in which Rutger Hauer plays a blind swordsman who lost his vision during the Vietnam conflict.

But my favorite in the series, and it's saying a lot, is "Zatoichi at the Fire Festival" in which the Blind Swordsman goes against another Blind Yakuza boss. It is one of the most intense, brutal, and exciting films in the long-running series and places the swordsman in peril. He is betrayed, lured into various traps, and the scheme is clever. Zatoichi's reputation finally catches up with him and he is not as underestimated as he had been in previous films. 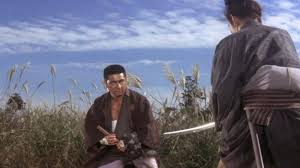 Zatoichi is a treasure to Japanese cinema and Katsu is a charismatic wonder in the role. Take advantage of the opportunity wherever and whenever it arises to catch some of these beautiful Chambara films.

My son has recently fallen in love with Rokugan after playing a few sessions of the second edition game that I ran for a game store. But he wanted the latest edition, and finally whittled us down to pay for the new Beginner's Box Set I, myself, was always stuck running the games since I started playing in 2001 and made a condition be that he ran the game and let me play as a character only helping a little with the rules. (He's just turned 14)

So our usual gaming group got together this past weekend and picked our characters, with me picking Isawa Aki. At first I thought it strange the Shugenja didnt have access to any spells, but was intrigued with the role-playing aspects of the character as we entered the town. I decided to play her as overly talkative, very arrogant, sweetly condescending, and superior in every way. As the other characters scrambled to help this poor peasant upright his cart, I stood to the side and questioned him and examined the road for what must have done this terrible thing that would inconvenience us in such a way. To learn this was a servant to the house of the recently deceased Emerald Champion was very concerning.

Next, we watched as a Mantis attempted to bully the local innkeeper into renting him a room. While he may have been Samurai, he was merely a minor Clan representative. Doji-san, however, had a personal stake in the matter. He truly did not wish to share a roof with such a man. There may have been some personal malice involved, not that Isawa Aki would have been interested in such petty matters. But we were later visited by an honored spirit who tasked us with watching out for the young mantis, and perhaps even protecting his life. Such is the way of things I suppose. I was grateful for the opportunity myself.

Then came the trials themselves, and of course the first would be a display of physical skill and intense personal combat. We were given advice from our judges, but when Aki stood across from the well-fed monster that stood across the ring she understood she could either lose gracefully or give her all and try to shock her opponent into a misstep. So she charged with all she was worth, screaming "BANZAI!!!" in a very unseemly manner... truly, it caused her much embarrassment but did succeed in unnerving her opponent who staggered back at the sight of the frail shugenja charging toward him. Though she gave her best during the trials that relied on her skill and superior approach, she fell back on pure moxie to overcome her perceived weakness.

Emotionally drained after the contests, Aki and her companions found themselves in a nearby Sake House where the charming Phoenix toasted to the lasting friendships that would be born through these trials and struggles. Unfortunately some ill mannered Ronin approached their table, and after a series of personal insults the proud Phoenix could no longer bear the strain of the days activities. Falling silent, tears spilling from her features, Aki was the first to lash out violently and smashed her staff into the teeth of the offending Ronin. With nothing but pure pluck and a distinct lack of true skill, she next sent her staff into a crippling blow that took out another Ronin's knee. The rest threw down their weapons at the command of the Lion, and the Samurai were able to retire for the evening.
:::

I truly enjoyed the new system and found a lot of potential in it. I guess finding additional dice sets for the other players will be difficult as we had to share the single set among five players and a GM. None of us took damage so we're a little confused regarding how that will work when it happens, but it feels mostly straightforward. While Aki seemed to be focused on casting spells, she had no spells to cast until we were told to level up our characters. My son, who has struggled to run a few previous game systems found this one fun and easy to maintain pacing on. So we're looking forward to later sessions.

MECHANICS: Utilizing a "roll and keep" engine, the latest L5R changes things up by relying on unique custom dice to determine results. No longer using numbers, the results vary between "Success", "Opportunity", "Strife", and "Explosive Success" randomly distributed between Ring Dice (6 sided)and Skill (12 sided) dice. Characters roll a number of dice equal to their rating in the given Ring or Skill, keeping a number of those dice equal to the Ring number. The results are less "Success vs failure" but precisely HOW one succeeds and fails. Some results are a combination of both success and "Strife".

Strife is the most interesting element of the game. In keeping with the tradition of Samurai drama, it is very important for them to maintain their dignity and stoicism. Often the greatest struggle is the one within the Samurai- watch Yojimbo, 7 Samurai, or even Lone Wolf and Cub to see the way th Samurai maintain their "face" and what happens when the emotions are too much to contain- whether good or bad. Strife accumulates, building stress until the characters are forced to react in an emotional manner that reveals the Samurai's true Face to the world. An embarrassing loss of glory and honor can result.

Opportunity is another interesting aspect that allows the players to add a few narrative pieces and gain non-successful advantages that will do little to affect a task but will result in some interesting moments. We struggled with this element a slight bit, but did try to explore the possibilities. (In the above, I had rolled two explosive successes and an opportunity with strife, allowing me to add the shocked and somewhat impressed reactions of the judges during the wrestling scene.)
Posted by Mad Mark at 9:21 PM No comments: